Cosmos traded in a highly volatile crypto market in 2022, but 2023 is showing signs of recovery. CoinMarketCap shows that the global crypto market cap has increased in 24 hours.

According to a poll conducted on Twitter, 53.8 % of participants see the early part of 2023 to be bullish. In contrast, 46.2% predict a bearish market trend for early 2023. However, Twitter user Neon Panda states that these predictions are speculative since crypto is complicated.

Cosmos (ATOM), ranked number 20 on the crypto market list, has shown signs of a recovery in its price today, January 9. Cosmos has benefitted from this improved market outlook as its native token ATOM is also in the green today.

How Long Will Cosmos (ATOM) Ride The Bullish Trend?

ATOM is currently on a bullish trend at the start of the year. The formation of longer green candles shows that the bulls have the upper hand in the market. The asset has broken out of the sideways trend and has continued to rise on the chart.

The asset is trading above its 50-day and 200-day Simple Moving Averages (SMA). It implies that both the short-term and long-term sentiments are currently bullish. Also, the Relative Strength Index (RSI) is giving off similar signals with the reading at 75.87, which is in the overbought region.

The Moving Average Convergence Divergence (MACD) is also bullish. The MACD is above its signal line, which is a buy signal. It implies that ATOM might continue its price increase in the coming weeks without negative occurrences.

However, note that if a digital asset falls by 50%, it would need to recover by 100% to return to its previous price. This feat might be complex to accomplish for altcoins. Also, investors should consider that altcoins are more volatile than large-cap cryptocurrencies like bitcoin. 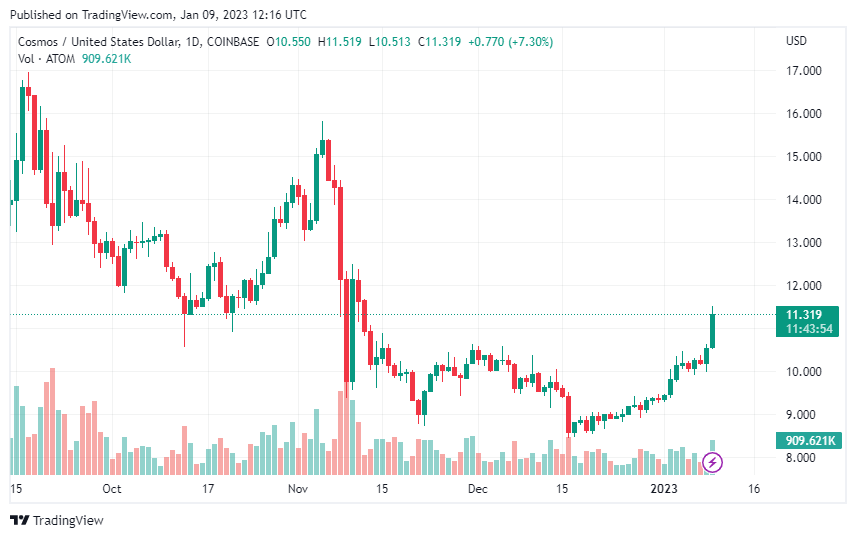 What Is Driving Cosmos (ATOM)’ Resurgence?

Cosmos (ATOM) is enjoying a price resurgence due to increased trading activity, according to data from CoinGecko. The Cosmos Network seeks to serve as a bridge connecting other blockchains to communicate seamlessly.

Also, the provision of regular upgrades on the network, such as Web3 solutions, has helped its popularity. On the Cosmos network, blog users receive regular updates about events.

Cosmos has a community with a rich following where information and communication remain a priority. Developers can also communicate and exchange ideas in the community.

The network also supports up to 266 modern apps and services. With a thriving ecosystem and everyday use case, it is easy to see why the token is enjoying a resurgence.